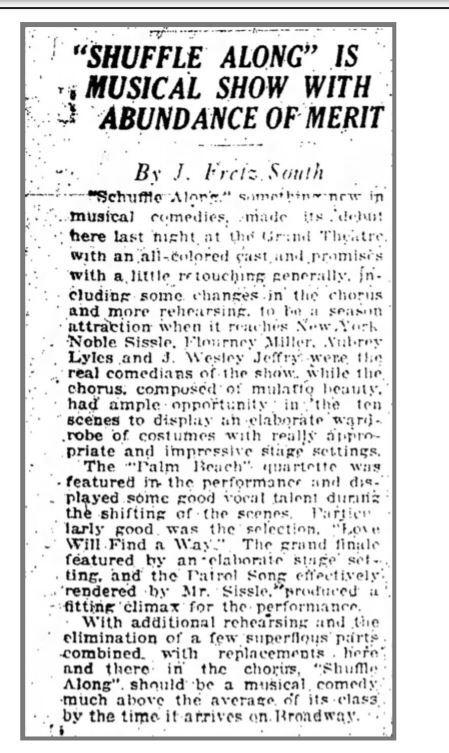 The opening night review of Shuffle Along from Trenton, NJ.

While Shuffle Along would eventually prove to be a transformational and hugely successful show, the producers faced a rocky road getting it to Broadway.  The out-of-town tryouts were not uniformly successful, while the company struggled to keep going with its limited backing.  The first stop on the tryout tour was Trenton, New Jersey, but the company couldn’t afford the train fare for the short voyage across the Hudson River.  Blake recalled: “We got down to Penn Station and I was ready to turn around and go straight home but Sissle wouldn’t let me. He said we’d get there somehow, and we did.”

Earlier the team had noticed an unshaven, poorly dressed man hanging around rehearsals. They assumed he was there to leer at the showgirls.  Blake continued the story, “But Al Mayer knew him and said we should get him to stay with us on tour. When we were at the station, Al went to him and sold him one-half of his share in the show to get us on the way to Trenton.”

The show opened in Trenton with a cast of 78.  The local critic singled out for praise the song “Love Will Find A Way” along with Sissle’s performance of James Reese Europe’s “On Patrol in No Man’s Land” during the second act interlude that he performed with Blake.  The reviewer concluded: “With additional rehearsing and a few superfluous parts combined … ‘Shuffle Along’ should be a musical comedy much above the average by the time it arrives on Broadway.”   Critic “Billboard” Jackson, writing in the African-American newspaper the Chicago Defender, praised the show for presenting a natural picture of black music and comedy, particularly noting that the music spanned a wide variety of influences:

[its authors] succeeded in constructing a vehicle that carries all of the unctuous humor and the piquant melody of their race without for one moment getting away from its natural atmosphere … the harmonies of camp meeting, Spirituelles [sic], other day minstrelsy, crooning, longing love and the effervescent happiness of the Race have all been utilized to good effect.

SHUFFLE ALONG MAKES BOW.  TRENTON, N. J., March 25. — Shuffle Along, comprising an all-colored cast, made its debut here last night at the Grand Theatre where it was presented by Al. Mayer. Something new in musical comedies, the piece which was originally styled The Mayor of Jimtown, offers an evening of entertainment, amusing and diversified enough to suit the fancy of the most critical theatre-goer. While in need of a little brushing up and retouching generally, including some changes in the chorus and more rehearsing, it gives all the earmarks of being a season attraction when it strikes New York. The teams of Miller and Lyle, and Sissle and Blake are responsible for the book and music, and also play a prominent part in the mirth provoking. Miller and Lyle were as much of a hit with their cross-fire as they proved themselves to be in vaudeville, while Sissle put over several vocal numbers in telling fashion. One of the features of the evening was the Palm Beach quartette and their warbling met emphatic approval. The music throughout is tuneful, especially “Love Will Find a Way.” During the ten scenes the chorus, composed of Mulatto beauty, had ample opportunity to display an elaborate wardrobe of costumes with really appropriate and impressive stage settings.

Though well-received, the show’s opening was not profitable.  Al Mayer reported that after all the receipts were in, he was $20 short of enough cash to take the troop to its next stop, Washington, DC.  He had to borrow the money from “an usher who was saving for a new suit ... upon my promise to send him $30 from Washington” when they arrived.

Blake recalled a slightly different chain of events that enabled them to proceed to D.C.:

[We had] no money for train fare. Al Mayer is down at the station, walking up and down the platform wondering what to do. Up walks this man and says:

“’Yeah,” said Al. “Well, sir, that’s nice to hear, but we don’t even have enough money to get to the next town.” So the man said he’d be right back, walked into the ticket office, and talked to the station master.

It turns out that man was one of the owners of the railroad, for when he came back he had tickets for the whole company.

Mayer noted that the company was able to “breathe easy” once they reached the nation’s capitol, because they had a guaranteed income there for two weeks, before moving on to Philadelphia.   But in D.C., they discovered that the person manning the box office had used the show’s receipts to gamble on the horses. Once again, they were stuck without cash.  Although the cast often didn’t get paid, they stuck with the show, hoping that if and when they finally opened in New York it would be a hit.  Sissle recalled: “The players knew they had little future in vaudeville because of their race and when we told them we had no money but would not take them farther than walking distance from New York, they agreed to gamble with us.”

Blake explained how the company managed during its pre-Broadway days:

We’d play one-night—if we were lucky, two-night—stands. No one knew us, so they’d only book us for a short time. We’d get good reviews in one town, but before they could do us any good we’d be on to another town—that is, if we had the money. One night Sissle and I were sitting on the steps of a building, and Sissle was writing out checks. They weren’t any good until we could wire the box office receipts into the New York bank—we were always one day behind at the very least. I looked up. “Sissle”’ I say, “Do you know where you’re sitting?” “No,” he said, and looked around. We were sitting on the steps of the jailhouse, writing bum checks! We broke up in a fit of laughing and couldn’t stop.

Life on the road was hard and not only because they had no money. There was the problem of only being allowed to stay in black hotels and most of them were not too nice. Instead, they booked rooms in boarding houses and private homes in exchange for tickets for the show. On one occasion they had no money so Lyles talked a cab driver into lending them some cash to pay for their lodging with the promise that the New York office would repay him later. As Blake told it, “There were five of us. Miller and Lyles slept in one bed, Sissle in another; Paul Floyd, who was in the show, was in the bed with me. All night long the chinches [bedbugs] had a picnic, and Paul kept waking me up, slapping the chinches.” 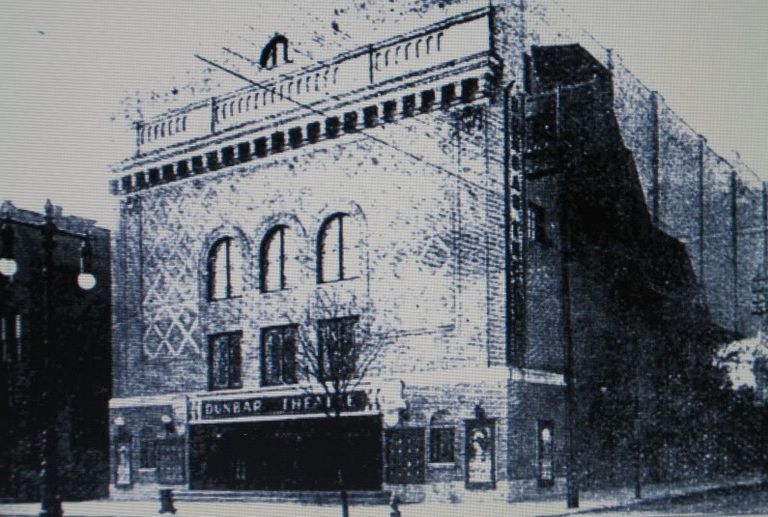 Their engagement at Philadelphia’s Dunbar Theatre, a black venue, was a hit.   According to Sissle, however, producer John Cort and the theater owner Abraham Erlanger were worried that the show’s audience was entirely black and therefore it was not certain that it would appeal to a white audience—despite, in Sissle’s words, “laugh[ing] themselves sick.“  To hedge their bet, producer Harry Cort booked the show into a series of one-night stands in white theatres around Philadelphia, including two nights in late April 1921 in Reading, Pennsylvania, at the Rajah Theater.  The show garnered positive reviews in the local paper, which raved that “Shuffle Along [is] the best colored musical comedy since the days of Williams and Walker ...  [It] contain[s] many catchy tunes and many cleverly written comedy scenes.”  The show’s success even at white theatres convinced Cort that the show might just succeed on Broadway.  However, by the time the show landed on Broadway, it was $18,000 in the hole. Finally, after months of hard work, on Monday, May 23, 1921, Shuffle Along opened.