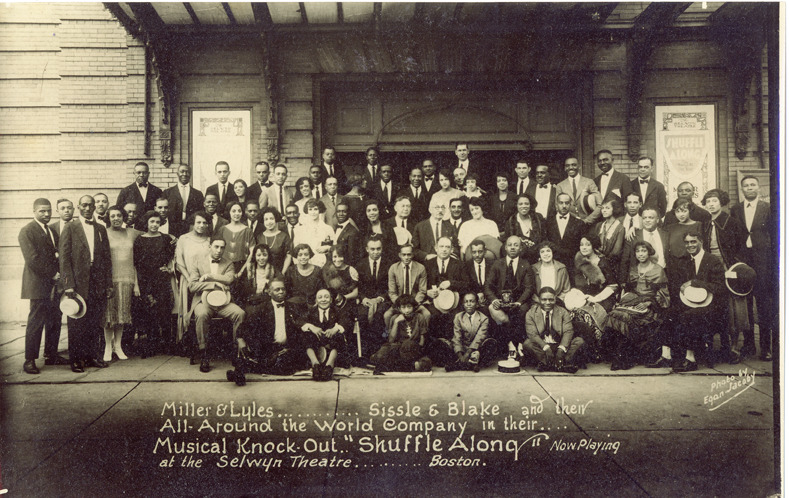 The cast assembled outside the theater in Boston.

After enjoying great success on Broadway, the original Shuffle Along company hit the road to tour the country.  The first stop of the touring company was Boston where, in late July of 1922, producer and theatre owner Arch Selwyn booked the show into his theater initially for a two-week run.  Blake was surprised to find the long line at the box office made up mostly of blacks. This was strange, because the New York audiences were primarily white. Upon questioning them, Blake discovered that the blacks were household help who were sent by their white employers to buy tickets to the show.

The New York Age proudly reported the many positive reviews in the Boston press, including a “flattering half-column review and . . . a [separate] picture of Miss Edith Spencer [who had taken the role originated by Gertrude Saunders] in the pictorial section” in the Boston Herald.   As a publicity stunt, the show’s creators were invited to meet with Boston’s mayor to be photographed and presented with keys to the city.  Under the headline “Colored Pair Honored,” Variety reported that this was “the first time that any member of the negro race, in the acting profession, has been thus honored by any American city.” The New York Morning Telegraph wryly noted: “The keys are guaranteed to open anything in town, including the klavern of the Ku Klux Klan.”   Shuffle Along eventually played almost three months in Boston before closing in late November, and would have run longer but for a lawsuit from the classical theatre company that had the following booking at the theatre.

The Boston American praised the production, noting “from the moment Eubie Blake turns his Mona Lisa smile on his orchestra…until the last double shuffle of the finale, “Shuffle Along.” is concrete proof of what we have known—namely, that the Negro has a sense of harmony, rhythm and melody that no others can equal.”  Speaking of Miller and Lyles, he noted: “They have not tried to glorify their Race, as they might pardonably be expected to do, but …each twist of the dialogue is new.”  The review was so positive that it was proudly reprinted by the African American newspaper the Chicago Defender. 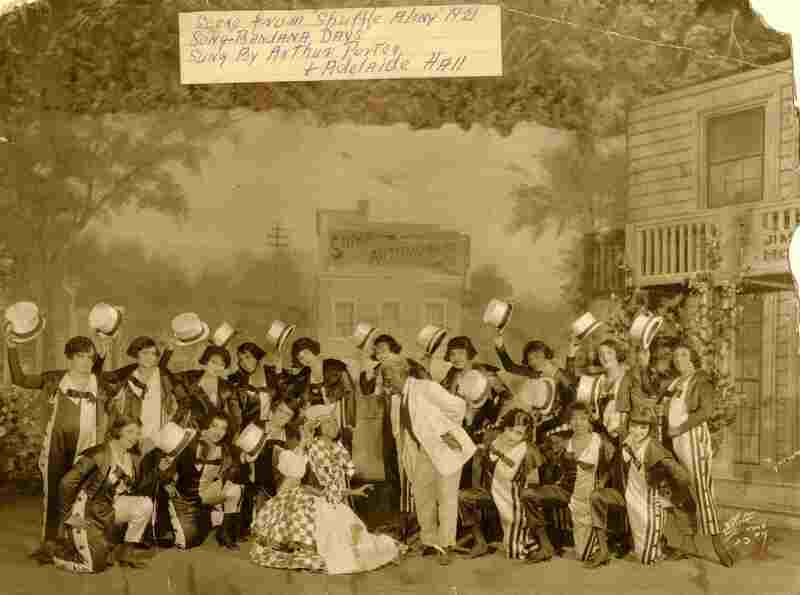 Josephine Baker (3rd from right, front row) in a scene from Shuffle Along.

This reviewer particularly praised a “chorus girl who literally ‘walks off with the show’…not by mere beauty…but by her comedy dancing.”  Although not cited by name, this clearly refers to the huge impression made by Josephine Baker, who first joined the main company in Boston.  Baker would become the surprise hit of the show, despite having a nonspeaking role.

The show’s creators were initially reluctant to hire Baker when she auditioned for the original company.  Sissle remembered:  “We had turned her down when she tried out for us in Philadelphia because she was not yet sixteen. We had wanted to hire her but by law we couldn’t.  She was heartbroken. We produced a number-two company to play one-nighters throughout New England while we were still in New York.  Word got back to us that a comedy chorus girl had joined the company after we had rehearsed it and sent it out on the road—it was Josephine. She had slipped out on the road to join that company because she thought we didn’t like her or want to hire her. How glad we were to get her back.”

Baker’s memory of the audition was even more traumatic.  She related: “I found myself face to face with Mr. Sissle, a thin man with a full head of hair.   Mr. Blake, plump and bald-headed, sat at the piano, his nose buried in his music.  He never once opened his mouth.  Nor did Mr. Sissle waste words.  ‘Too young,’ he snapped.  I began my usual routine.  ‘But I’m seventeen…’ ‘Sorry.  Too small, too thin, too dark’ …. Sissle wanted his chorus to look like Tillers, a highly successful white company…” The Tiller Girls were a popular white chorus line of the day.  Baker felt that Sissle was “ashamed” of his race, but he would have argued he simply was trying to break into the white theatre world.

While the show was still in New York, Al Mayer hired Baker for the touring (or second) company.  She was finally given her chance on stage as one of the chorus. After one of the chorus’ numbers, she broke free and started dancing wildly. The conductor tried to keep time but she was out of control. The stage manager fired her on the spot.  Blake called the theatre to inquire about how the show was doing and was told that Baker was fired. Blake asked, “How did the audience react?” The stage manager told him that the out-of-town audiences thought she was terrific. Blake immediately responded, “Put her back in.”

Her success on the road secured her a place in Boston.  And from the time she set foot on the stage, audiences adored her. As Sissle related, “Every place we went, people buying tickets asked: ‘Is the little chorus girl here who crosses her eyes?’ In time she became the highest paid chorus girl of her day….”

Now a full member of the company, Baker really started to shine, with many other critics noting how her comedic dancing was making her a star of the show.  In a review titled “A Chorus Girl, But Can’t Be Overlooked,” one critic enthused: “Where the best part of a capacity house singles out one little girl in the chorus and gives her attention every time she appears, it shows the recognition of qualities such as stars are made of.  There is a little girl like this in the all colored musical success ‘Shuffle Along’ …  A sturdy youngster, with a comedy way that asserts itself in everything she does … her name is Josephine Baker.  Jolly as she seems to be in her work, the stage romping is serious business with Josephine.  She has to work to help support her mother and little brother at home in Washington, DC.” Typically, this white critic emphasizes that Josephine only took to the stage to help support her family, giving her an “honest” motive to pursuing what many viewed as the scandalous life of a traveling actor.