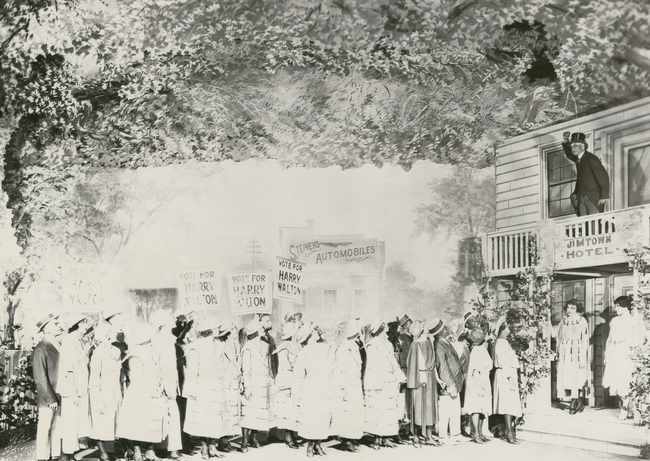 Many people today think that Shuffle Along was a small show but it employed 42 singers, dancers, and actors, which was just about equal to the typical Broadway musical of its time. However, the similarity ended there.  The show was presented at a lecture hall turned theatre off the beaten track. It had an all-black company of performers. And its music was unlike any other heard on Broadway. The dancing was unique compared to other shows. It had blacks in leading roles, who were not just glimpsed as maids and butlers. It had energy in abundance without the trappings of Ruritanian romances of the typical operetta. Most notable was that it opened under the radar of most Broadway audiences and critics. There was no hype and no buzz. It opened to an audience who had no idea what to expect when the curtain went up. Frankly, it was like no other show on Broadway: A true sleeper hit.

Business was so good that three weeks into the run the company cancelled the Wednesday matinees and added Wednesday midnight performances that were heavily attended by theatrical folk. A few weeks later, all the matinees were cancelled. Shuffle Along soon grew into the most successful show playing on Broadway with a weekly gross averaging $13,000 a week (almost $180,000 in today’s dollars) against $7,500 (a little over $100,000) in weekly expenses.  Once the show was a verified smash the top ticket price was raised to $3.00, or about $40 in today’s dollars.

By the time Shuffle Along reached its half-year anniversary, the African-American press was celebrating its success.  The New York Age noted that it was a “record run for a colored attraction” drawing “capacity audiences at every performance [with] present business point[ing] to a long and prosperous run.”  By this time, the show’s producers could add “new costumes” (presumably made for the show), including the “latest fashions” for the chorus girls.

Lester A. Walton wrote a longer article celebrating the show’s 6-month run, noting the importance of the milestone, which he found to be “pregnant with historical significance”:

It’ s been more than a decade since a colored musical attraction figured in a long run in New York . . . To parallel this record was the burning ambition of many a colored performer. . . [However] it has been a herculean task to secure a suitable downtown theatre for a colored musical show.  Archaic ideas, predicated on the futility of such a step, have invariably prevailed. Now comes “Shuffle Along” faithfully functioning as a stream-roller.  It has knocked over and crushed to earth many of the barriers that have stood in the path of the colored show’s progress.  Precedents have been established.

Not only did Shuffle Along mark a highpoint for blacks on stage, it broke the color barrier for the audience as well.  Variety noted that blacks were seated in the orchestra section of the house and not forced to sit in the balcony as in many of the theatres. True, the paper noted that, “the two races rarely intermingled” --which made its white readers less nervous at the possibility of being seated next to a black patron. In fact, the orchestra section had a line of demarcation between the three-quarters of the downstairs reserved for whites and the rest offered to blacks. But even that small step proved to be historic.  Shuffle Along’s desegregation policy, as tentative as it might have been, was the first step in an eventual true opening of theatre seats to all races. In its tours and subsequent productions, the producers insisted that the theatres become fully integrated with seating reserved for blacks on all levels.

But not all of the black population were as amused with the proceedings. Leaders of the black community decried the show for its blackface musical comedy tropes. They felt that black theatre should be refinements of the black experience and not exploit the usual black clichés. Miller and Lyles’s blackface, exaggerated black dialect, and old-fashioned stereotyping did disservice to the black cause. And the light-skinned black chorus also riled the critics.  Nonetheless, the highlight of the show was the chorus numbers, featuring light-skinned dancers hoofing to the jazzy score.   Its “selection of bronze beauties made . . . ‘Shuffle Along’ the talk of the world.  Only perfect 36’s were chosen and [the production’s] idea of perfection in feminine beauty was marvelous.  Indeed, like the Cotton Club revues, Shuffle Along’s dancers fit a European model of beauty, from their fair skin to long limbs.  This made the show more acceptable to white audiences. 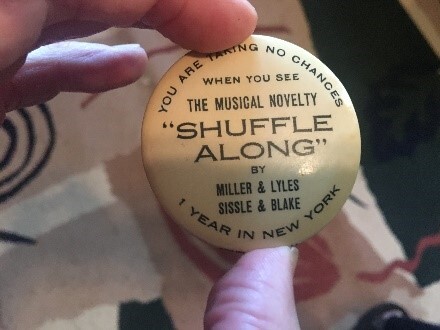 Anniversary token celebrating Shuffle Along's one-year anniversary on Broadway.  On the reverse side, a window revealed two small metal balls that you could try to roll into two holes.

On the anniversary of the show’s year on Broadway, members of the touring company, then playing Brooklyn, joined the cast at the 63rd Street Theatre for a gala midnight performance. There were 140 performers on the stage and the reaction was tumultuous.  The Broadway production of Shuffle Along closed on July 15, 1922 after 504 performances. At the time of its closing Shuffle Along could boast it had the eleventh longest run of any Broadway musical up to that time including Show Boat, which ran 572 performances. And the show had two numbers in the top fifty songs of the year, “Bandana Days” and “I’m Just Wild About Harry.”