The Story of Shuffle Along 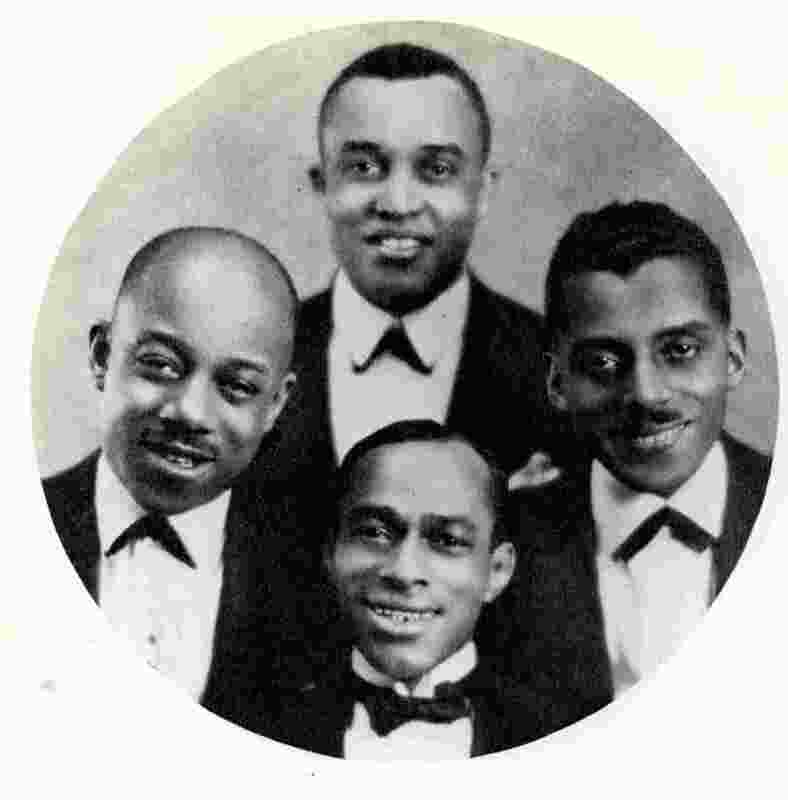 Clockwise from left: Blake, Miller, Sissle, and Lyles at the time of the successful Broadway run of Shuffle Along.

Shuffle Along was the brainchild of two Black vaudeville acts who came together to conquer White Broadway: singer/lyricist Noble Sissle and pianist/composer Eubie Blake; and comedians/authors Flournoy Miller and Aubrey Lyles.

On meeting Sissle and Blake at an NAACP benefit, Miller and Lyles immediately saw the opportunity that combining their talents would bring to both acts.  According to Eubie, Miller approached them saying: “'You boys is the missin’ link of Negro show business.  Why can’t we put on a colored show for Broadway?'”   That was the same as saying, “'Why can’t we get a colored man for president of the United States?'”

In an interview conducted by the black press after the show’s success, Sissle recalled, “Blake and I always wanted to take out a show, but needed a book.  Miller and Lyles had taken out several [shows], but had little success because they lacked original music.”  They made an ideal match.

A pact was made that they would join forces to try to mount a Broadway show.  Eubie says the show was originally to be called “Who’s Stealin’?, because there’s a drugstore and everybody was stealin’ in the drugstore.”  With their touring company, Miller and Lyles had previously produced a play called Who’s Stealin’ in 1920 that had the duo portraying co-owners of a small department store; elements of this script were probably used as the basis for Shuffle Along.  The duo were constantly recycling their signature characters, placing them in different situations but drawing on similar verbal and physical humor.  Sissle objected to the title, perhaps due to its focus on minstrel stereotypes of thieving blacks, and—as the show developed—it became Shuffle Along.

As Eubie tells it, Sissle and he wrote the songs independently of the work Miller and Lyles did to create the show’s “script”: "[Sissle and I worked together in my apartment] on 138th Street.  We don’t know what Miller, Lyles gonna write.  They would say, 'We gotta say – … "The cow jumped over the moon"-- Sissle, what do you think would fit there?'  He’d say, 'So-and-so,' and write the title down.  And I’d write that.  We hadn’t seen no book.” Indeed, a “book” wasn’t written down for the show until several years later, after its successful New York run, in order to copyright it.

The two duos approached Al Mayer, a white booker for the Keith vaudeville circuit and friend of Miller and Lyles, to help them get the show on the stage.  Mayer was impressed by what he saw; he told a contemporary interviewer:  “I had always believed there was room for a good Negro show, but I had never found the show.  I had taken out seven Negro productions and all were flops.  But I saw the possibilities as outlined by Miller and Lyles, and Sissle and Blake, and got busy.”

Mayer took his friend Harry Cort to lunch (with $2.50 to pay the tab lent by Sissle and Blake).  Harry, the son of theatre owner and producer John Cort, liked the idea of a black show, and an audition was set up with his father.  As Blake told Robert Kimball and William Bolcom: "We ran down a few songs and Old Man Cort—well, he just sat there with a glum look on his face. When we did our theme song, 'Love Will Find a Way,' the old man didn’t say anything.  Nothing. He just got up and walked out, saying, 'Thank you, boys. Thank you very much.'  I thought we were dead for sure, but it turned out the old man liked the song so much he said he’d help us and give us a theatre, sets, [and] some old costumes, if we would just give his son Harry an interest in the show."

To produce the show, Mayer and Cort agreed to an unusual arrangement for the time: a 50-50 co-ownership deal with the actors Miller and Lyles and songwriters Sissle and Blake.  Rarely if ever did black performers have a stake in their own productions; this arrangement would prove to be a financial boon to all involved once the show became a hit.  In May 1921, they established the “Nikko Producing Corporation” with “Cort and Mayer providing the capital, and the others the production.”  Profits were to be split among the principals.

Interactive Map: The Original (A Company) Tour →
The Story of Shuffle Along