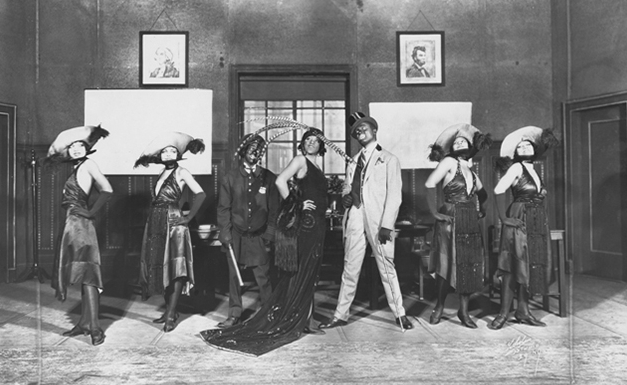 Narrator   Shuffle Along featured two female leads: Lottie Gee as the young ingenue and Gertrude Saunders portraying the more classic “vamp” character who use her sexual wiles to entrance the lead comics, Miller and Lyles.  Not surprisingly, Saunders’ songs were written in the contemporary blues style, befitting her character.  The New York Age praised Saunders’s lusty vocals on her featured songs, saying

Newspaper Critic   For the first time white theatregoers …are having such numbers    . . . as they really should be sung.

Narrator    Unlike others in the show, Saunders already was well-established on the stage and record.  Even before the show opened, OKeh Records invited her to record two of her featured numbers: “I’m Crazy for that Kind of Love” and “Daddy, Won’t You Please Come Home.”  In this excerpt of the song’s chorus, you can hear Saunders’ use of dramatic falsetto and a shouting vocal style that fits her character as a brassy femme fatale: <Gertrude Saunders 1921 78 recording excerpt>

Listening to this recording today it is hard to understand how revolutionary it must have sounded in 1921.  Saunders was used to projecting her voice in the days before amplification, as her powerful voice nearly leaps off the wax.  However, her wide vibrato and stage-like diction seem hopelessly antique to modern ears, hardly exuding raw sexuality as they did for listeners in her day.  And despite critics raving that she performed “real” African-American music, she sounds not that much different than similar white belters of the day—and nothing at all like the blues singers like Bessie Smith.   While Saunders was celebrated as a blues shouter, Gee had the misfortune to be a black artist who sang songs in a way that appealed to white audiences. 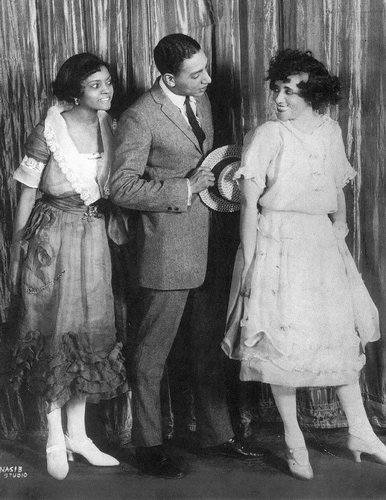 Florence Mills, Roger Matthews, and Lottie Gee in Shuffle Along.

Lottie Gee    I wanted to sing in a classical style.  When I was a little girl, I heard of singer Sissirietta Jones singing on stage.  She was  known as the “Black Patti” because of her operatic singing skills and had her own very successful touring company at the turn of the century.  I remember that my greatest ambition was to be a wonderful singer like Patti.  True, I had never heard this diva sing, but I had heard others talk so much of her that I immediately adopted her as my ideal.

Newspaper Critic     One critic singled out Gee as a black artist who could tackle opera, noting that the “pint sized prima donna . . . [shows that] the colored race’s possibilities as a source of grand opera stars.”

Narrator    Yet, for all her ambitions, Gee was still a theatrical actress, an occupation that “better” black society looked down upon. While Gee went unrecorded, Sissle and Blake oversaw a later recording of "Love Will Find A Way" in 1950 by opera singer Charlotte Hollomon and Laverne Hutchinson, who had sung on Broadway.  Although Hollomon's vocal style is clearly influenced by her operatic training, it's likely that Gee sang  the song in a similar way: <Charlotte Hollomon and Laverne Hutchinson, 1950 demo recording> 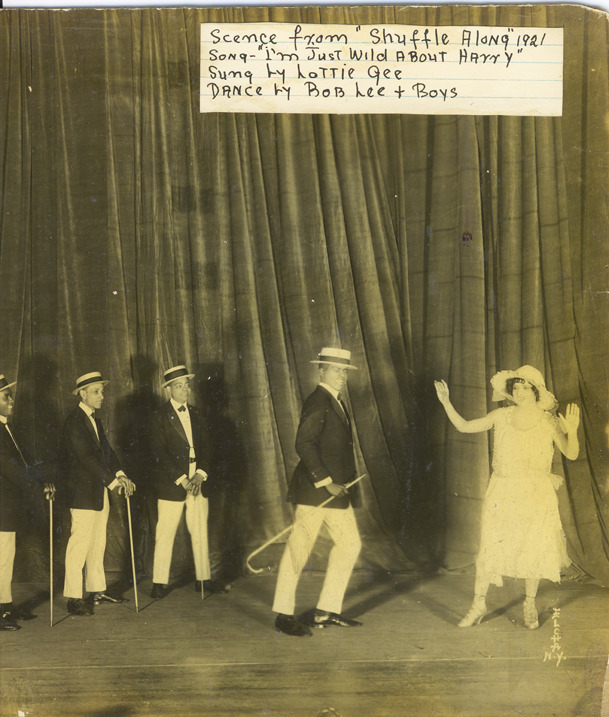 Bob Lee (in straw hat) and Lottie Gee in the opening number of Act II of Shuffle Along.

Narrator    Despite all her success, Lottie Gee faced racism and sexism that would limit her ability to make a name for herself on the Broadway stage.  Following her immense success in Shuffle Along, Gee strangely disappeared from theatrical history. Unlike other female stars who made their Broadway debuts in the show—including Gertrude Saunders and Josephine Baker--she never made a record, never appeared in a film, and by the late ‘20s was virtually forgotten.

Lottie Gee    Mr. Blake--I only called him Mr. Blake in public, but I called him "Daddy" at home--was unwilling to leave his wife to marry me.  Not being a blues or jazz singer, I found it hard to find work on stage or in clubs, so I moved from New York to Los Angeles where I teamed up with my old friend and fellow Shuffle Along alumnus Edith Spencer.  We got a job singing in a nightclub in Shanghai, China!  But I couldn't forget Eubie and began to drink and miss my cues.  When I got back home, they put me in an asylum--and I was never the same.

Narrator    But Eubie never could forget Lottie Gee and would come to regret the way he treated her when he was younger.  Here he is singing her theme song "Love Will Find A Way" in her memory in the 1970s: <Eubie Blake sings and plays>