Part I: Being Lottie Gee: The Challenges of Being a Black Actress on the White Stage

Lottie Gee shown in a 1921 newspaper clipping promoting Shuffle Along.

Narrator    Who was Lottie Gee?  Where was she born? How did she make her way onto the stage?

Lottie Gee  I was born Charlotte M. Gee on August 17, 1886, in Millboro, Virginia, in the foothills of the Appalachians, which was known for its hot springs.  My family moved to Kentucky just across the river from Cincinnati when I was very young.  One of my older sisters, Marion, had performed as a dancer/comedian on vaudeville, and this inspired me to pursue a similar career.  I made one of my first appearances as a chorine in the 1909 touring cast of Cole and Johnson’s The Red Moon—a hit African American musical of the day.  My light complexion allowed her to appear as a “Gibson girl” in the show’s chorus, a role not usually associated with black actresses.  In 1911, I partnered with singer/dancer Effie King, and we toured on vaudeville.  A reviewer writing in the African American press praised us for weathering the difficult conditions faced by black performers and succeeding on the stage:

Newspaper Critic   In no other field have colored Americans with artistic aspirations found the road to success so hard as that leading to prominence upon the stage.  . . . [While] the profession has in the past merited severe criticism… it has improved with time . . . Conspicuous on the rol[e] of those who are endeavoring daily to raise the standard . . . [are] Misses Effie King and Lottie Gee . . . as a refined singing and dancing act.  These talented young women . . . have excellent voices and know how to use them.  The act is beautifully costumed and staged with artistic taste.

Narrator  This reviewer used code words like “refined” and “artistic taste” to indicate that the performers were a notch above black-faced minstrels, representing an advance beyond earlier stereotypes.  The reviewer also proudly noted that both women came from educated families and had sung in their church choirs in their younger years, subtly countering the stereotypes that female performers were lower-class.  The review concludes with the solidly middle class endorsement that “both [performers] own property, thus showing that their efforts have not been in vain.” 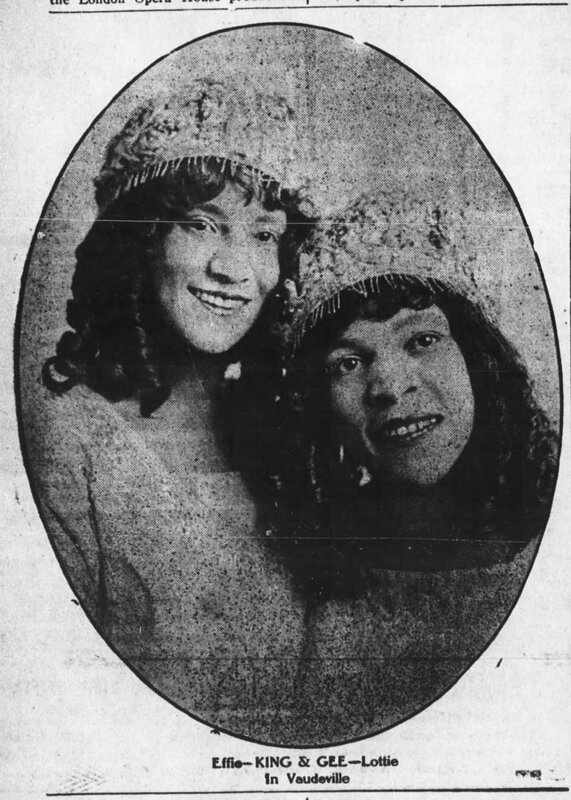 Lottie    By the late teens, I was working as a vocalist with Will Marion Cook’s Syncopated Orchestra.  Cook was one of the best-known Black composers of the day and a great musician. In late 1919, I travelled with them to England, where I performed for much of the next year.  We then toured through France, Italy, and got as far as China!  I really enjoyed playing in Europe; there was very little racial prejudice. In fact, the French government would deport any Americans who made a scene in the nightclubs where “management permits Negroes to dance with white girls.”   My popularity was so great that in August I returned briefly to New York for an appearance at Harlem’s Lafayette Theater, winning rave reviews in the African-American press:

Newspaper Critic    Miss Gee has an act that can bear rigid inspection and severe criticism from every angle.  This young lady is attractive in appearance and her costumes, particularly that creation of black which she dons toward the close of her skit, make her doubly pleasing to gaze upon.  She sings and dances well, showing ability to render both ragtime songs and high class ballads….Anyone who can do as strong a single as Miss Gee can hold their own in fast company—musical comedy especially.

Narrator    In 1921, Gee was hired to play the love interest in Shuffle Along.  Shuffle Along  Was the first musical comedy with a script, songs, and dance numbers written by African-Americans—and an all-black cast.  It was created by two African-American performing duos who had established themselves on the white vaudeville circuit—an unusual accomplishment for any act during the early decades of the 20th century.  As Eubie recalls: <Soundclip of Eubie Blake> 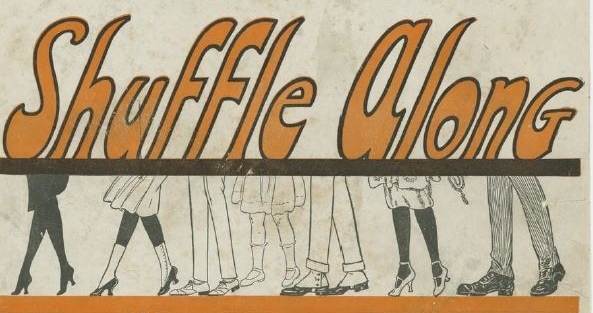 Shuffle Along logo used on the show's sheet music and in print advertisements.

Narrator   Unlike the show's comedians, Flournoy Miller and Aubrey Lyles,  Sissle and Blake shunned blackface and appeared on stage sporting tuxedos, presenting a “class act” of songs designed to appeal to their white patrons.  Shuffle Along combined the allure of blackface comedy with their syncopated, but sophisticated songs.  The bright syncopation of songs like "I'm Just Wild About Harry" and “I’m Just Simply Full of Jazz” was an immediate sensation, as we can hear in this recording by lyricist Noble Sissle made during the show’s run:   <Noble Sissle 78 recording of the chorus of "I'm Just Simply Full of Jazz">

Narrator   Shuffle Along did more than get Broadway up on its feet:  It presented a picture of black life that went beyond minstrel stereotypes, with a range of characters from preachers to business men to politicians.  Gee  portrayed a modern black woman; instead of being a sexualized vamp, she portrayed a young, well-bred daughter of a successful local businessman.  She was an immediate sensation on stage.

Lottie Gee    My picture appeared in newspapers across the country--both in the Black and white press!  Reporters clamored for interviews; my dressing room was literally filled with flowers!  Eubie paid all of my expenses and gave me my own apartment---he even bought a piano for me so the two of us could practice the show's songs together.  It wasn't long before we were a couple--even though Eubie still had a wife who he kept at his own place. 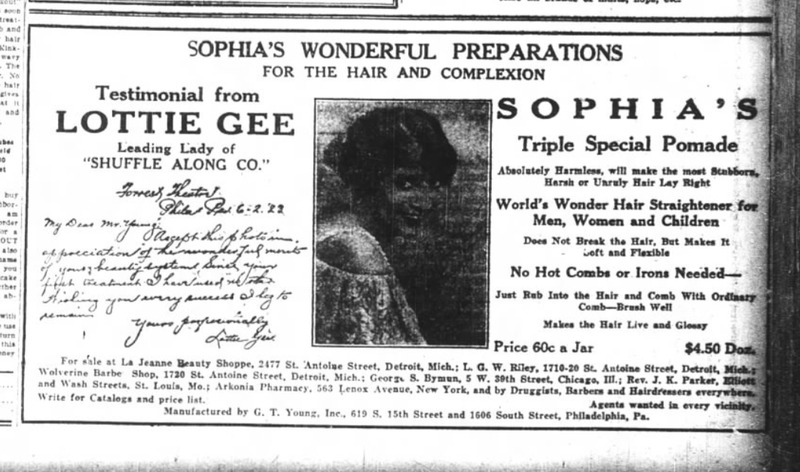 Narrator   Gee was an ideal performer to play the controversial role of a romantic lead.  Besides her great talents as an actress and singer, she was fair-skinned with straight hair, which she wore bobbed in the popular style of the day.  She could easily have passed for white.  In this way, she fit into the standard for black chorines in general who were expected to be light skinned and conventionally attractive.  Drawing on her conventional good lucks, Gee landed an endorsement deal with “Sophia’s Triple Pomade,” a hair-straightening treatment, that was:

Advertisement    Absolutely Harmless, will make the most stubborn, harsh, or unruly hair lay right/World’s wonder hair straightener for men, women and children/Does not break the hair, but makes it soft and flexible/No hot combs or irons needed/Just rub into the hair and comb with ordinary comb—brush well/Makes the hair live and glossy/Price 60 cents a jar

Narrator  Gee gave a “testimonial” endorsing the product while on the road with Shuffle Along:

Lottie Gee     Forrest Theater, Philadelphia, Pennsylvania, June 2, 1922.  My Dear Mr. Young:  Accept this photo in appreciation of the wonderful merit of your beauty system.  Since your latest treatment, I have used no other.  Wishing you every success and beg to remain, Yours professionally, Lottie Gee. 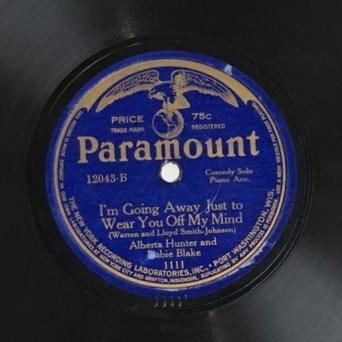 Narrator   Black actresses were expected to meet white ideals of beauty.  Reflecting prejudice within both the white and African-American communities—where light skin was seen as more desirable than darker hues—dancers with dark skin found it difficult to find work.  Josephine Baker—who would become the most famous star in Shuffle Along—initially was passed over by lyricist Noble Sissle, who thought she was too young and too dark to appear in the production.  Baker’s recalled her audition with Sissle as being traumatic:

Josephine Baker  I found myself face to face with Mr. Sissle, a thin man with a full head of hair.   Mr. Blake, plump and bald-headed, sat at the piano, his nose buried in his music.  He never once opened his mouth.  Nor did Mr. Sissle waste words.  “Too young,” he snapped.  I began my usual routine.  “But I’m seventeen…”  “Sorry.  Too small, too thin, too dark”

Narrator     Baker felt that Sissle was “ashamed” of his race, but he would have argued he simply was trying to break into the white theatre world.  In addition to the prejudice against darker-skinned women, Alberta Hunter--a contemporary of Lottie's who joined the Shuffle Along company when it went on the road--commented that black actresses were expected to dress in stereotypical clothing--unlike Lottie who appeared in Shuffle Along in elegant contemporary clothing.

Alberta Hunter   I never got a chance to play big time, you know.  I had to always put on an Aunt Jemimey dress and so did everyone.  Everyone and I had to put on Aunt Jemimey clothes, because they wouldn't let Negro women play the big time without having to do those kind of things.

Narrator     Hunter's singing style was a cross between a Broadway singer and a blues shouter.  Here's an excerpt of her singing "I'm Going Away Just to Wear You Off My Mind" accompanied by Eubie

← Listen to the Podcast
Part II: "Love Will Find A Way" →
Part I: Being Lottie Gee